EMF Sensitivity Put to the Test

There have been at least 46 studies involving more than a thousand people to see if those suffering from electrosensitivity are deluding themselves.

“During the past decade a wide range of symptoms has been reported to be triggered by exposure to RF-EMF,” the radiofrequency electromagnetic fields that emanate from cell phones during use, including headaches, nausea, dizziness, and fatigue. The news media has been promoting this as “a new medical condition, called electrosensitivity, or electromagnetic hypersensitivity.” These stories have been driven, in part, by “people who claim to have detected a clear link between their own poor health and exposure to a specific electrical device,” which “can have major implications for a person’s quality of life and is associated with decrements in general health status, increased levels of health service use, and impairments in occupational and social functioning.”

As you can see below and at 0:50 in my video Is Electromagnetic Hypersensitivity Real?, to see how common this was, researchers sat college students on two big electromagnetic coils and then went through a symptom checklist, asking how the students felt under both strong and weak electromagnetic field conditions.

You can see the graph below and at 0:57 in my video. Students did report neurological symptoms, including headaches, drowsiness, dizziness, fatigue, and irritability, as well as visceral symptoms, such as palpitations, muscle tension, and nausea, though more nausea was experienced under the “weak” EMF condition. They also reported abdominal pain, shortness of breath, and a little heartburn, and said they could feel it in their skin as “crawly feelings,” “cold skin,” “sweating,” and “itching.” And, their sensory organs registered blurred vision, ringing in their ears, dry mouth, and a little stuffiness, along with some other symptoms. In all, “40 college students were asked to rate their symptoms during ‘sham’, ‘weak’ and ‘strong’ exposure. In reality there was no exposure at all, i.e. all sessions were a ‘sham.’” The students weren’t blasted with any fields at all. The “coils seemed to be connected to an impressive electric power supply with coloured lights and an operating panel, but actually they were no real electric connections between them (i.e. no EMF was generated at all).” 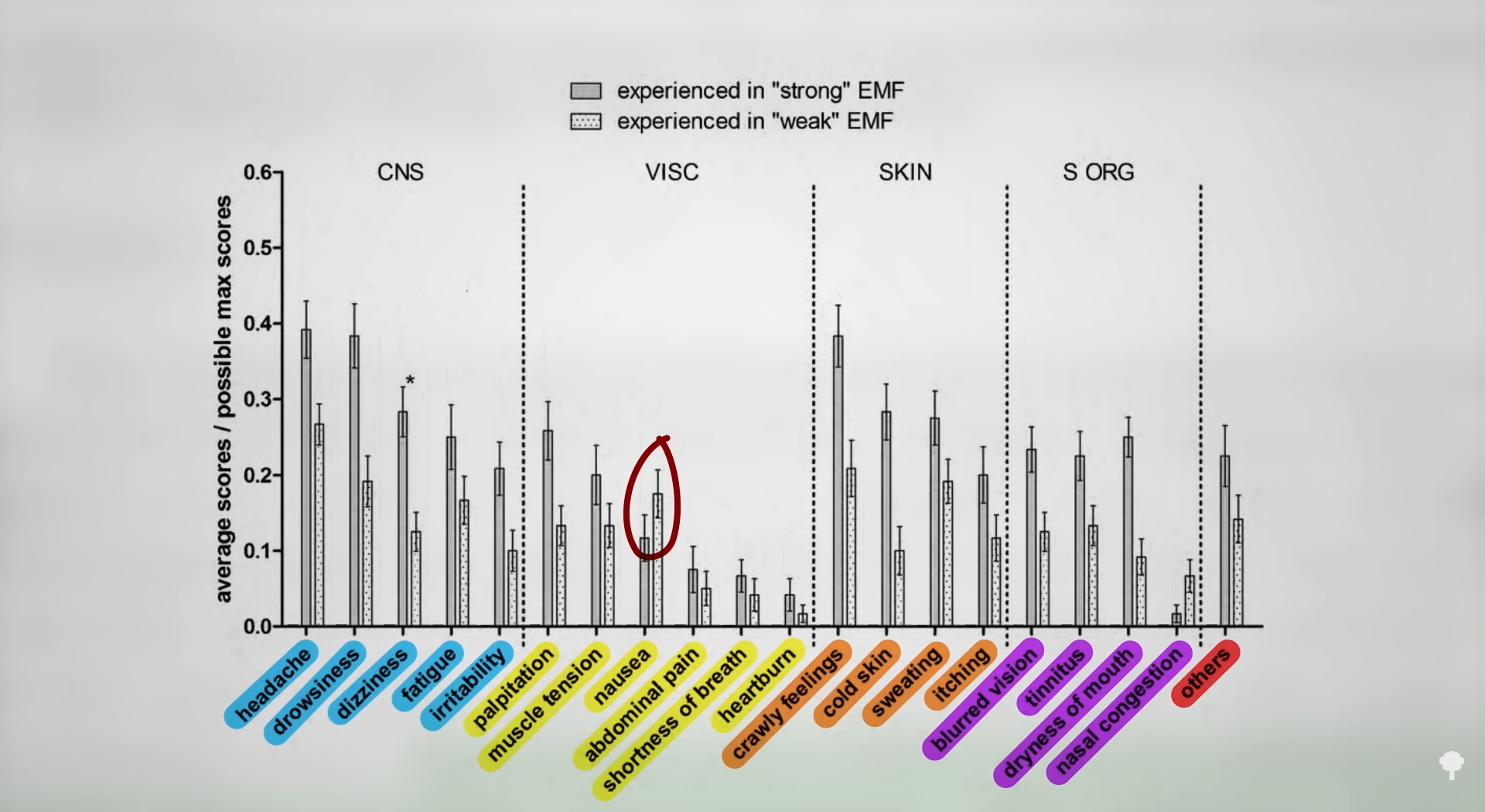 The study was titled “Polluted places or polluted minds?,” suggesting that those who claim to be experiencing these symptoms may be just deluding themselves. Before jumping to conclusions, though, you want to study people who actually suffer from the disorder. So, researchers tested 20 men and women who claimed they were sensitive to cell phones. As you can see at 2:18 in my video, the subjects reported a variety of symptoms upon exposure to cell phone radiation—all sorts of pains, sensations, dizziness, breathing difficulties, and more. So, researchers sat them down in a chair with various active cell phones strapped near their head, and, boy, could they feel it! As you can see below and at 2:27 in my video, they experienced a variety of symptoms—but, ironically, they felt a bit worse with a sham, like a dummy bean-bag phone next to their head! “Contrary to definite expectations,” none of the so-called electrosensitive “could distinguish whether the cellular phones were turned on or off.” 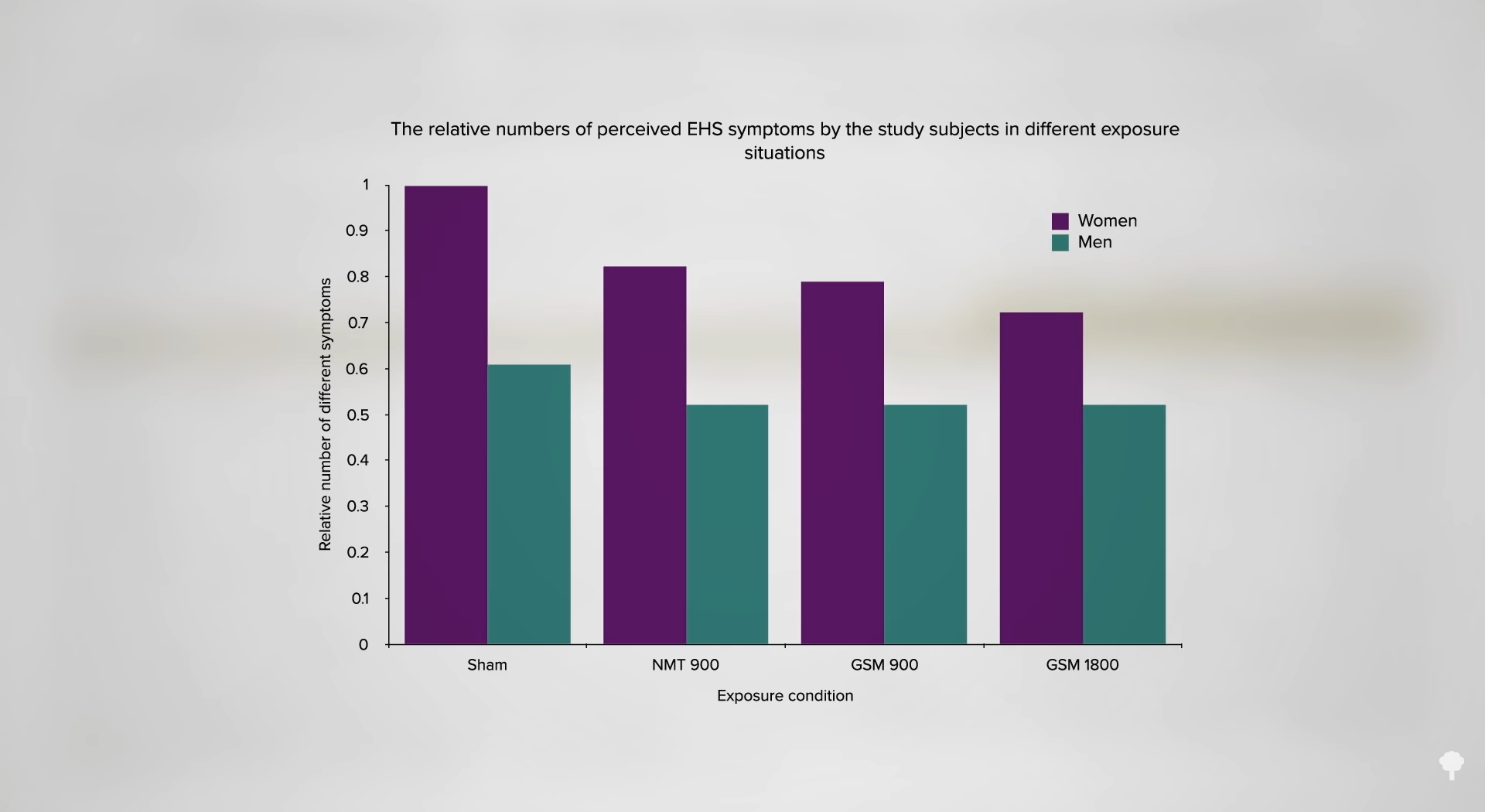 Nearly all such studies have found there is no evidence that the symptoms are anything but psychological in nature. Researchers have noted that those who claim such hypersensitivity tend to exhibit more obsessive-compulsive, hostile, phobic, and paranoid traits. So, they changed the name. What used to be called “electromagnetic hypersensitivity” in the medical literature is now called “idiopathic environmental intolerance attributed to electromagnetic fields,” an acronym (IEIEMF) that sounds like something straight out of Old MacDonald’s Farm. “Despite the conviction of IEI-EMF sufferers that their symptoms are triggered by exposure to electromagnetic fields, repeated experiments have been unable to replicate this phenomenon under controlled conditions.” How many are we talking about? “To date, 46 studies involving 1175 volunteers with IEI-EMF have tested whether exposure to electromagnetic fields can trigger the symptoms reported by this group.” But, when put to the test, when all the studies are put together, as you can see below and at 3:49 in my video, not only were no significant impacts found on any of the symptoms, there was no evidence that subjects were even able to detect the radiofrequency electromagnetic fields.

Not a single person, ever? Well, there was one study in which two participants “showed extraordinary performance,” guessing when the cell phone was on 97 times out of 100. Had that just been chance, that would be like the odds of being struck by lightning four times in a single year. They failed to replicate the result a month later, though, and in science, if you can’t replicate something, it basically doesn’t exist.

So, why does this notion of hypersensitivity persist? Well, there is now an entire industry profiting from various gizmos claiming to protect people against electromagnetic fields, and the media seems to love the hypersensitivity story. Yet “[w]hy don’t journalists mention the data?” The media has tended to claim that “research into this area has been neglected. But the research has been done. In fact, dozens of double blind studies have been performed, but they have been systematically ignored by almost every single journalist covering the issue.” Indeed, we have blind provocation studies published in the peer-reviewed academic literature that are almost all negative. You could argue that the evidence is nearly unanimous. “So why doesn’t the media ever mention this data? Perhaps they deliberately and mischievously leave it out. Perhaps they never came across it, and are incompetent.” Or, maybe they’re just suckered in by the snake oil salesmen, the “aggressive and well coordinated lobbyists” selling all manner of “insulating paint…and insulating beekeeper hats for trips outdoors…” Not only do these hucksters conveniently fail to mention the dozens of studies proving them wrong, “they also viciously attack anyone who even dares to mention the data, accusing them of insensitivity, of attacking sufferers, and of denying the reality of their symptoms.”

No one is saying people are making up symptoms, though. The science just suggests that whatever the symptoms are, the cell phones don’t appear to be causing them. And, if you want to go there, one could just as fairly argue that those who are trying to sell these patients a bill of goods “are themselves hindering better understanding” of their customers’ suffering.

What does this have to do with nutrition? Nothing. It’s just me responding to your requests for our research team to dig into other controversial areas, like mammograms, where multibillion-dollar industries pressing on the scales, making it hard to disentangle the truth. You can click here for a full list of my videos covering mammograms.

We’re doing what we can. Too bad there aren’t other websites like ours, offering objective, evidence-based analyses on all of the important questions in life. If you want to support our work please consider donating.

I Finally Got My Hands on a Pair of These Internet and Celeb-Favorite Tennis Shoes, and They’re Just as Comfortable as Everyone Says

The latest on Omega-3s: the operative word is “may”

Advice To Assist In Your Weight Loss Battles

Fitness Made Easy With These Easy Tips

This Article Contains All The Acid Reflux Answers You Need

No Result
View All Result